In South Africa, I saw a country struggling heal itself from Apartheid. Then I met a woman who was not trapped by a disempowering mindset. 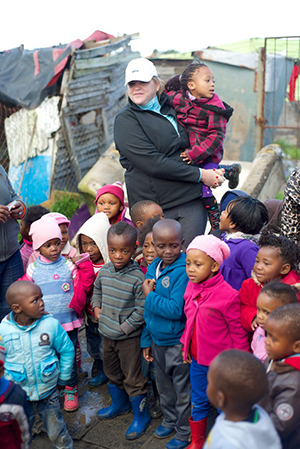 I spent a couple of weeks in South Africa a few years ago and the experience transformed my views about leadership.

South Africa is a country trying both to heal itself from the throes of Apartheid and to build a new future in a land rich with natural resources. I learned about the history of South Africa, the root causes of Apartheid, and the path toward overthrowing horrendous conditions and replacing them with democracy. I saw extremes that Apartheid had created – some of the most affluent places in the world next to desperate poverty. I saw optimism for the future (mainly among white citizens) and hopelessness among the disenfranchised. Everyone spoke to the great opportunities that existed there; everyone said they didn’t know how to realize those opportunities. A conundrum? Maybe, but maybe a set of complex issues was made more difficult because the mindsets I witnessed were so disempowering.

Then I met a woman who was not trapped by a disempowering mindset.

But this daycare center was not just a place to warehouse young children; it was a development center for 2-5-year-olds – which was particularly remarkable in that early childhood development is a relatively new and growing concept in South Africa.

The director of this center did not set out to change all of South Africa; only her small corner of it. Her vision was not only to create a meaningful development experience for her wards, but also to teach parents how to care for the well-being of their children. She also confessed that her vision extended to converting the park back into an oasis where families could go to share safe and happy times with their children.

She told me that everything is possible one child at a time.

The center took in upwards of 100 children a month, staffed by four paid teachers and lots of volunteers. The volunteers were parents. That was part of their agreement to send their children to this center – to spend time with their children and work to make the center a place for learning, and for meals, and quiet, and comfort, and safety. As a result, parents who had no history of providing real care for their young children became active in their children’s growth and development.

According to the center director, this was all accomplished one parent at a time!

For example, these 2-5-year-old children would tend and grow vegetables at a nearby greenhouse, and the food they grew became part of their meals at the center. Parents would be asked to volunteer to cook these meals, and when they did, they were taught about nutrition and cooking. They had the chance to see their children respond to healthy meals, and to see what could happen when their child was the center of attention.

This was a real unexpected act of leadership. As parents spread the word about this facility, more and more came to check it out. They also checked out the playground facilities – and the park. As more parents spent time there with their children, they put pressure on local police to clean up the park. Regular patrols were established, and over time, the disruptive influence of crime gave way to a sanctuary where parents could bring their children to play (whether they were patrons of the daycare center or not).

When I visited, we walked through this park. It was bristling with young and old who were enjoying an experience previously denied to them: sharing picnic lunches, reading books and magazines, and playing chess, connecting in ways that established a real sense of community.

One person had a big impact.

Surely this had to be the work of city government, or perhaps, national government. But no. While government contributed, this happened because one person engaged in an unexpected act of leadership to change a small corner of her world; because she didn’t allow herself to be trapped in old thinking about what others should do and what could never happen. She saw something that needed to change to improve the lives of children and families and her community. There was nothing in her background that suggested she could impact her community, but she took this as a personal responsibility, and then acted on that responsibility. She created real change in the hardest of circumstances. She led!

If there were a handful of such persons around this park, I wonder what else they could have changed? And, if they in turn were to inspire others to act on their own small corners, how far might that ripple reach?

Anything is possible when we see ourselves as change agents. We don’t need to wait for others to fix many of the issues we care about. We can do that ourselves!

Margaret Mead expressed the same sentiment a century ago, saying, “Never depend upon institutions or government to solve any problem. All social movements are founded by, guided by, motivated and seen through by the passion of individuals.”

Puzzle Pieces refer to where these ideas fit within the broader social and behavioral sciences. Most blog entries will include these connections. We will also try to recommend connected reading if you want to learn more about the topics covered.

The Beginnings of the UAL Initiative
This one woman’s leadership was so powerful and inspiring that I could not ignore it. I shared this story with my colleagues, Greg and Hettie, which led the three of us to begin questioning why we don’t see more examples of people stepping up to the real issues they cared about rather than simply complaining and hoping that others might address them. We started to wonder what would happen if more people understood that it was up to them to lead change, even though their current conditions may conspire against their success.

What captured me on my trip to South Africa was an example of real leadership that was different from the hierarchical, top-down, command-and-control model that has been common throughout history. While we have seen more evidence of servant leadership, high engagement leadership, participative leadership and empowering leadership in the past two or three decades, we don’t often see much on unexpected leadership – leadership that goes beyond what’s expected of a person in his or her work role. That was the key take-away here. This center director was hired to create a child development center, not a place where parents learned to be better parents. No one had asked her to focus on turning a crime-ridden park into a community asset where everyone could enjoy a peace that was uncommon in this community. Her leadership was truly unexpected, and it caught my attention in ways that now Greg, Hettie and I want to better understand.