Associate Professor of Management and Leadership Brad Harris has been announced as the new academic director for the BNSF Neeley Leadership Program at the TCU Neeley School of Business.

Harris has been a part of the BNSF Neeley Leadership Program for six years, working alongside the outgoing Academic Director Greg Stephens to provide students the skills they need to become great leaders both in and out of the classroom.

“There is a lot of extra effort involved in the classes we teach in the program,” Stephens said. “Brad’s been fully engaged in bringing in outside involvement with the students, going with them on retreats, and organizing study trips both domestic and international.” 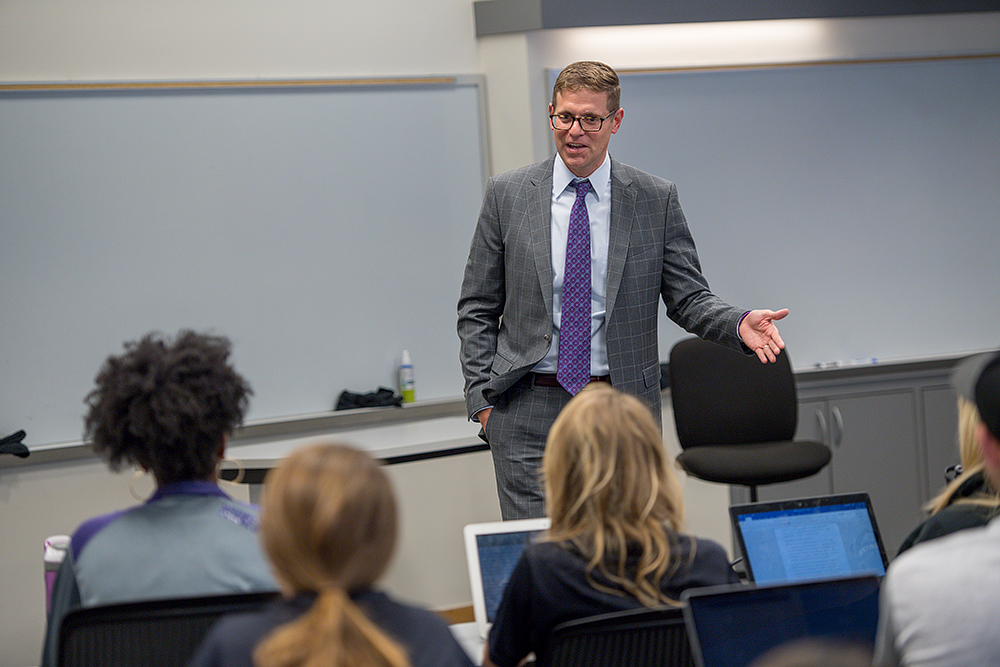 One of the three original founders of the leadership program, Stephens was appointed the program’s first academic director in 2013. Since then, he has worked tirelessly throughout the years to improve and expand upon the program, providing its students with the very best to ensure they give their best in return.

“Greg recognized that we should not expect students who come in to be pre-formed leaders,” said Hettie Richardson, associate dean for undergraduate programs at TCU Neeley. “Students will have setbacks. Things aren’t always going to go as planned. He knew our job was to help them learn from those challenges and become better leaders as a result.”

“Everyone who has been involved in the program, whether it be faculty, students or staff, is incredibly thankful for Greg’s contributions,” Harris said. “He has made tons of personal sacrifices, was always willing to help students, and relentlessly pursued excellence for the program.”

As the new academic director, Harris will be responsible for evaluating and updating classes to reflect current world interests, overseeing the program’s recruiting system, and communicating with key stakeholders.

With these new responsibilities, Harris plans to further improve upon the systems that already makes the BNSF Neeley Leadership Program stand out. He plans to improve the program’s recruiting to ensure the classes are more representative of the university’s ethnic diversity.

He is also reaching out to other potential stakeholders to invest in the program. Harris hopes that by bringing in more corporate partners, he can provide the students with even more resources and networking opportunities.

Along with these and other developments, Harris is connecting with other TCU Neeley professors to make the program a more interdisciplinary program, giving its students a broader range of opportunities to hone their skills. Lance Bettencourt, associate professor of professional practice in marketing, as well as Micheal Sherrod, the William M. Dickey Entrepreneur-in-Residence at the TCU Neeley Institute for Entrepreneurship and Innovation, are already dedicating their expertise to the program.

“I want the BNSF Neeley Leadership Program to be the flagship program for the business school and be a model for what undergraduate leadership development can be for TCU and beyond,” Harris said.

“I know Brad can be the kind of person our students can trust and rely on,” Stephens said. “I have every confidence in the world that he will take this program, try new things, help it grow and make it better.”