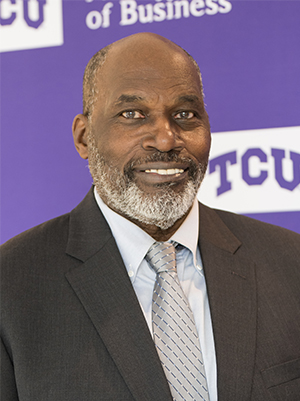 Being first means paving the way, breaking barriers and setting the standard. As one of the first Black student athletes to graduate from the TCU Neeley School of Business in 1974, Charlie Davis persevered and became a TCU legend.

Davis’ college experience and the challenges he faced were important factors in achieving his goal of playing in the National Football League, winning a Super Bowl championship, building successful business ventures and much more.

Davis returned to TCU Neeley to share his story on November 4 as part of the Office of Inclusive Excellence’s speaker series, “Against All Odds: Stories of Grit and Determination.” Co-moderators for the event were Ron Parker ’76 and Kenny Thompson Jr. ’03, both of whom are TCU Board of Trustee members.

Parker, President and CEO of National Association of Securities Professionals, and Thompson, Vice President of External Affairs for PepsiCo North America, were TCU student athletes who competed in football and baseball respectively. Throughout the one-hour discussion, both men regularly expressed their appreciation of Davis and his journey. They acknowledged the foundation Davis laid for those who followed him.

“I’m fully cognizant that my experience was based on their experiences,” Thompson said, referring to Davis and Parker. “It is humbling to be sitting up here with two TCU legends.”

Davis played football all four years at TCU and is a member of the TCU Athletics Hall of Fame. After graduation, he was drafted by the Pittsburgh Steelers as a defensive tackle and was a part of the Steelers winning their first championship in Super Bowl IX.

Parker told the audience about the time when Davis was playing in the NFL and returned to TCU for spring football workouts. Parker and other teammates were in awe of Davis’ abilities, and listened closely as Davis explained what he had to endure and the work it took to successfully compete as a professional athlete.

Although Davis valued being a student athlete at TCU, he said his first priority was on earning his degree. He recounted a time when a group of Black teammates left to play football for other schools because of challenges regarding “social life.” However, Davis remained a Horned Frog.

“That experience had me do some really deep thinking on why I was here,” said Davis. “I was focused on graduating with my class. I wanted to make All-American. I stayed because I was set on my goals. My focus was on my degree and making my parents proud.”

Davis said he encountered multiple moments that could have redirected his focus but he refused to be deterred and found creative solutions. He described a situation where a professor told him he could not attend a class because there were not enough chairs. Davis’ solution was to bring a chair from another classroom.

TCU Neeley Accounting major Ryan Cassara said he walked away from the “Against All Odds” series with a renewed focus.

“It’s important for you to be able to stay focused and present in the moment at all times despite the many things that might be clouding your mind and visions,” Cassara said.

To view the full “Against All Odds: Stories of Grit and Determination” session with Charlie Davis, click here.