How to Find the Creativity to Fuel Your Business

“How many of you are amazingly, astonishingly, spectacularly creative?” asked Ray Smilor, Professor of Professional Practice, Innovation & Entrepreneurship, at the June 6 Preview Luncheon. 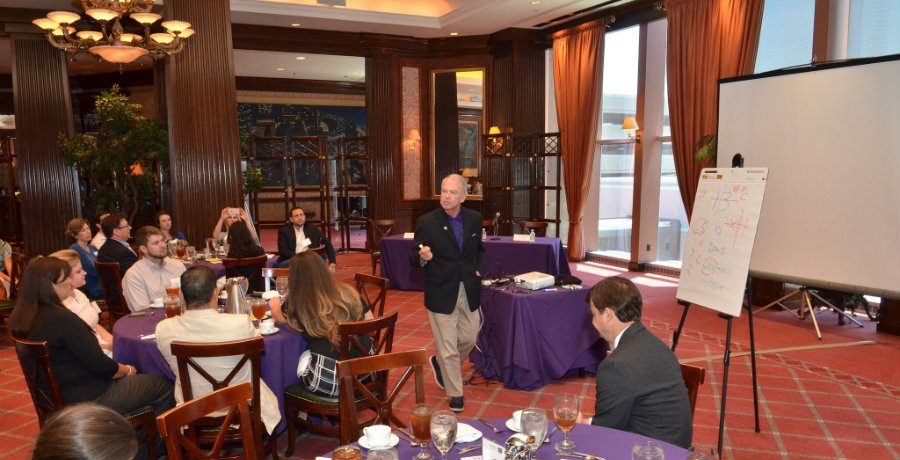 “How many of you are amazingly, astonishingly, spectacularly creative?” asked Ray Smilor, Professor of Professional Practice, Innovation & Entrepreneurship, at the June 6 Preview Luncheon.

Only a few brave souls raised their hands – some were savvy program alumni. Others were probably being ironic.

“None of you are creative?" he pressed the others in the room. “What about when you were a kid? What did you do when you got a cardboard box?”

“Turned it into a rocket!”, “Pretended it was an airplane!” we heard from around the room.

We all remembered the vivid imaginations of our younger selves. So, what happened to us? When we hear “amazingly, astonishingly, spectacularly creative,” what makes us think “that’s not me”?

“The education system teaches us we’re not creative,” said Prof. Smilor: “They pound it out of us!” He told us about a visit to his granddaughter’s kindergarten school, where he discovered a flip chart on “How to Color.” The directions specified: Stay inside the lines. Use appropriate colors. Fill in all the white.

So how do we reconnect with that imagination?

Prof. Smilor wrote “13” on an oversized Post-it® board and asked us, “What’s half of this?”

“Six point five!” a few people shouted from the room. Prof. Smilor wrote that on the board.

“One … and three,” someone said after a few moments.

Another person said “two” (half the sum of one and three). One said a little “b” (because 1 and 3 pressed together make a B, and half of that is b). Someone else said “thir” and then “teen.” Prof. Smilor kept prompting “What else?” until we had 10 different answers on the board – and we could have kept on if we tried.

We started to see that embedded in this simple exercise was the secret to tapping a group for creative solutions to complex problems.

How to Encourage Creativity in Your Team

Push past the familiar.

Every time Smilor leads this exercise, 6.5 is always first answer. Why? It’s what we’re taught. The first response is always going to be the most familiar, most common, most conventional answer.

Six-point-five also happens to be the “correct” answer. But in life or in business, is there ever only one answer? No; there are always more possibilities, often better ones than the first thing to pop into your head. When you keep asking “What else? What else?”, people have to dig deeper. You begin to see imagination and diversity creep in. Soon, you’ll find something you didn’t expect. Something amazing.

What keeps someone from speaking up when they do have an unconventional idea? Fear. They don’t want to look ridiculous. They don’t want to get shot down. If someone said “One and three? As two halves of thirteen? That’s the dumbest thing I’ve ever heard,” the discussion would be over.

Of course, there are plenty of other ways to kill ideas that are less aggressive, but just as deadly. “Yeah, but …”, “We’ve tried that before,” “That’s not how we usually do things,” “We don’t have the time/money/people for that.” We think we’re being helpful when we say these things, but what we’re really doing is shutting down the discussion and clamming up the creative mind.

Be willing to be wrong.

This is really the first rule of creativity. You’re bound to make a few missteps as you veer off the beaten path - but that’s what it takes to forge a new trail. Detractors may ask,“Don’t you know better?” but you can proudly reply “No!”

Besides, sometimes it’s the worst ideas that lead to the best ones.

Sir Ken Robinson, talking about the essence of creativity, told a story of a little girl in an art class. The teacher asked her what she was drawing.

“No one knows what God looks like,” said the teacher.

And the little girl replied, “They will in a minute.”

3 Ways to Tap into Your Own Creativity

The Executive MBA program at Neeley is nothing like the restrictive education system Prof. Smilor described at the beginning of his presentation; instead, this EMBA program seeks to unlock the creative abilities and talents of every student, encouraging them to explore diversity of thought, and find brand new ways of looking at things.

Prof. Smilor left us with a few tips for getting started.

“You’re holding this live thing between your hands,” Prof. Smilor said. “And then you let it go – and it’s amazing. Life is like that. Let go, and amazing things happen.”

He told one final story about a woman who had tried to start many companies, and lost investor money on every single one. She got yet another idea, and brought it back to one of the investors.

He said, “You know, there are lots of blemishes in your past.”

She replied, “Yes, but my future is spotless.”

Don’t let the past keep you from taking risks and imagining new possibilities. If we change the way we think, we can be pretty creative people and do pretty amazing things.