In November 2021, Treadway took the reins as the first Black CEO of Ford Credit Europe. His passion for global business first began in the Professional MBA program at the TCU Neeley School of Business. 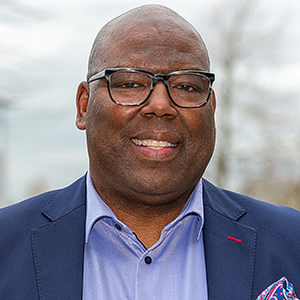 Carlos Treadway MBA ’05 was working as a branch asset manager at Ford Motor Credit, the financial services subsidiary of the automaker, when he decided to pursue an MBA to expand his skill set. The flexibility of the TCU Professional MBA (PMBA) program appealed to him.

“I could continue to work full time. The other students were also working and could share experiences from different industries. And it would allow me to immediately apply what I learned to my current job. Those three things really made it work for me,” recalled Treadway, who lived in Flower Mound at the time.

But the deciding factor came during the application process, when Treadway met with TCU Neeley staff. It had been more than a decade since he earned his BBA from Northwestern State University in Louisiana, where he considered himself only an average student.

“But they looked at my work experience, my GMAT scores and my interview and knew I would excel at TCU. They saw something in me that I didn’t necessarily see,” Treadway said. “How they looked at me when I applied stuck with me. I’ve taken that experience and when I evaluate talent, I try to find what I would call shiny objects — the pluses without the minuses.”

“It exposed me to other industries. It also opened me up to the desire of working internationally. As part of the program, I went to Italy and that gave me exposure to global businesses and what it could be like to live and work outside the U.S.,” he said.

After completing his PMBA — for which he received a promotion and significant raise — Treadway continued rising through the U.S. ranks of Ford Credit, including roles as Ford Lincoln Mercury brand manager, director of minority dealer relations and dealer service manager, among others. In 2013, he accepted his first international assignment — a position in business development management at Ford Credit Asia Pacific in Shanghai.

“I always aspired to be a senior leader at Ford Credit, and I knew having international experience would help,” he said. “Our son was 7 at the time and my wife was open to the idea. It was presented as an opportunity that would benefit me, I would have opportunities for more than one role there and it would give me experience in a significant part of the world that was growing much differently than the U.S.”

Treadway with his wife, Kim, and son, Austyn.

Within five years, Treadway was named president of Ford Automotive Finance in China.

“That gave me an opportunity to run my own international unit, which was quite pivotal,” he said.

“The opportunity to develop and inspire people is really, really cool. If being the first Black CEO gives people incentive and encouragement for higher aspirations, I think that’s great,” he said.

Treadway maintains his strong TCU Neeley connection, from keeping in touch with faculty and staff to speaking to groups of visiting TCU MBA students when he was in China.

“It’s a really special place to me,” he said. “They saw something in me that I didn’t necessarily see in myself. Every time I think of that, it keeps me driving and moving forward.”