Alumni Panel Recap: “I Feel Like a Better Father, Husband and Worker”

Every preview luncheon features a panel of alumni who offer their personal insight into the benefits, challenges and experience of the TCU Neeley Executive MBA program. Here are some of our favorite soundbites from the May 3 luncheon.

Jesse felt stuck in his career, like he wasn’t able to learn anything or grow. He started researching MBA programs, and fell in love with the Neeley program after talking with Kevin Davis, Director of Recruiting and & External Relations.

Jesus had worked for Universal Technical Institute for just over 20 years and had grown in the organization, but didn’t know what he didn’t know. He started the EMBA program to learn what his skills were, build on his weaknesses and gain a broader perspective on business.

Ken had a job he loved, working for the Perot family for almost 25 years, making good money and traveling the world, but he wasn’t sure what he wanted to do next. He set a goal of making more money while working only 10-20 hours a week, and chose the TCU Neeley Executive MBA program to help him get there. 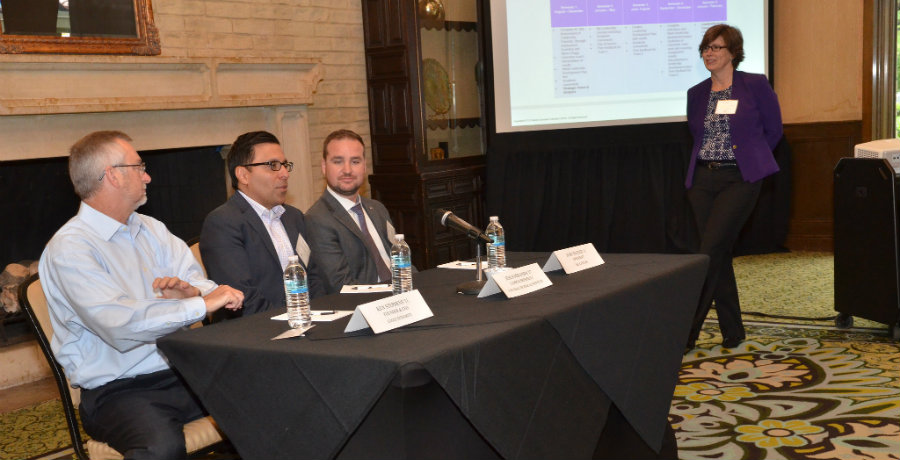 JESUS
I'm a very collaborative leader that focuses on building consensus. And what the program kinda brought to light is that it's great to be collaborative and build consensus, but you also have to make decisions and move forward. I was able to identify that, start working on it. Everybody doesn't have to agree, but we all have to have input and then be able to focus on that.

KEN
One thing I think I was missing was around the financial piece: I couldn't evaluate a company. I couldn't look and say this company's worth $5 million or $10 million or $100 million, whatever. Even though I was good with money and good with accounting, math, I couldn't really get my head around risk and around investment. I fell in love with it when I took Mo Rodriquez’s class. I quit after I graduated and started a venture capital company so I could do it full time.

JESSE
Coming from a smaller company, we don't have a lot of personal development. The program opened me up to working with different people, different strong individuals. Ken sat next to me the whole program. We just had a good time learning and working, and if I need to communicate more, I can try with Ken; and if he's hard to get information from, I just keep working with him. So we all had the opportunity to practice those skills right there in the classroom and then take it right back to work, and so for me that was the biggest part. In fact, my coach was Brooke and I still use her for my personal coach.

KEN
Some of the programs you'll consider around Texas, they may have larger classes, but I'll challenge you that the network you get from TCU will actually be a better network than you'll get from some of those other programs. You will know the 30-35 people. You'll know every one of them and you'll know them well. I guarantee, it's a fact. But not only will you know them, you will know most of their spouses. And so you're going to walk out of the class knowing 50-60 people well enough that they will take your phone call, and that's a big deal. I leverage that. I invest in a lot of things now. Stuff that I know very little about. So I'm frequently looking for somebody that knows a lot more than me in some industry, so I leverage my network and call people all the time – and they take my call.

JESUS
One of the things this program does is intentionally set out to build relationships, which I know was separate from every other program that I looked at. Ultimately, they're all going to offer finance and leadership classes and all of that but which one was going to be more like a family? For me it was TCU. I have relationships with people that I wouldn't have any other way. And one of my best friends now, I met in the program. It's just a great network and it's very intentional how they work to build it.

JESSE
I started looking at which is the best EMBA program that’s going to be the least expensive? And then after I looked at them, I said, “I gotta find the best program 'cause at the end of the day you're spending a lot of money.” Now that I've spent that money, I would do it again easily. I've already received a number of financial benefits because of the information I've learned from the program. But if I wouldn't have made another dime, it's still worth it. You're going to build networks and relationships and learn information that you're not going to learn any other way, so I'd probably pay twice as much.

KEN
Jesse had probably the best answer. You're gonna make more money, you're gonna learn, your network's gonna grow and all that kinda stuff – but your character grows as well. You're a better person after going through an experience like this. You just know more, you're just more confident, more grounded in life, you're in a better place. I already had a great job, I made good money. I was a 4 million-mile flier. I got to do what I wanted to do. Now, I take a lot of vacation. I don't work very much, 5-10 hours a week, and I make more money than I used to make.

ON JUGGLING WORK, FAMILY AND SCHOOL

JESUS
For me, it was kind of prioritizing what's in my life, right? So my extracurricular events, friends, travel, the family, I had to allot myself the time to do what's more important. There were two things specifically that I had to do to make it all work. I had to start getting up earlier in the morning so I could do work in the morning. And I actually read a speed reading course before I started the program. I think I went from like 24 pages an hour to almost 80. And now I'm close to 95, so we were super happy with this – all you guys that are 400-pagers, kudos.

ON THE GAP BETWEEN UNDERGRAD AND MBA

JESUS
For me it was subject matter – finance accounting. Although I took some of those classes in my undergrad, it was 20 years ago. Luckily, your team will help you through that. The teachers are amazing. They'll stay late. They'll come in during off hours and do those things. So if there's a subject matter that you're struggling with or something you wanna learn about, just ask. And I promise you, within the network of 30 or so students in the class, there will be subject matter experts. One of the cool things that happened with us is the class of 2015 alumni; two of them came in on their own time, on their own everything and tutored us on an off-class weekend, in finance and accounting.

KEN
Every instructor or professor, if I recall correctly, gave their mobile number in class, said “if you have questions, call me. Seven days a week, I'm available.” That doesn't happen very often. We had the same thing, instructors as well as students from other classes would come back on their own time, outside of class on like Sunday or whatever to teach some topics that people were struggling with and all of the class was always willing to step up and help somebody.

The panel shared much more insight that we didn’t list here. Join us for the next preview luncheon and don’t miss a word.