Every preview luncheon features a panel of alumni who offer their personal insight into the benefits, challenges and experience of the TCU Neeley Executive MBA program. Here are some of our favorite soundbites from a recent luncheon.

Fourteen years into her career with the police department, Amy made first level supervisor and realized she didn't have the confidence to lead her new team. She joined the TCU EMBA program to gain that confidence through acquiring new skillsets. She never imagined she would also gain a new perspective, new opportunities, and the ability to speak a whole new “language” in business.

Marcos had always wanted an MBA, but steady advancement over 11 years at Alcon made him think he could continue moving up on his own – until a general manager position in central America changed his mind. A team across nine different countries with complex business environments made him realize he needed a broader understanding of business administration as well as more in-depth understanding in key areaslike finance, labor laws and economics.

Felipe worked for AT&T 18 and a half years, doing labor relations as well as state and national projects with Communication Workers of America. He entered the program intending to validate the work experience he had – and instead discovered a new calling, pivoting to One Safe Place, a crime prevention agency with a focus on serving victims of domestic violence. 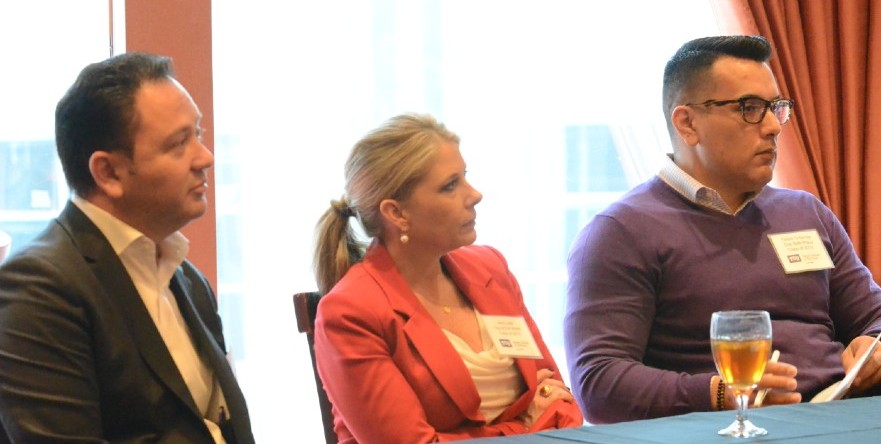 How did you transform as a leader?

Your strategic mindset and your ability to engage in conflict is a completely different approach than before you started the program. I met Amy years ago, and I approached her about a use of force report, on PD, in Fort Worth, that ACLU had brought to my attention and they wanted to take action. And Amy educated me on the report; she was already educating the new police trainees on this report, so we were able to engage in that direct conflict conversation, not only with the people that were bringing me the report, but really connecting them to an audience that they never had access to, which was the police department.

That development piece, it really changes your path in life and the way you approach business, the way I approach my nonprofit role. I would challenge you to always meet somebody that thinks differently than you, and sit down and have a conversation with them, because together you can come up with a better outcome.

I was able to become a better leader, to develop people, to think about how to support others, to keep advancing. The other part that I do believe I evolved a lot, was my strategic vision. I became more aware about how important the strategy is for a company to be successful in a particular arena or field. When you go into different geographies and different markets, the strategy you have as a global company may not be exactly the same in the different local markets where you compete. That also made me a better cross functional leader, being able to understand what are the different things that the different groups do for the company and appreciate their work.

How much time do I need; will I be able to breathe?

I worked Fridays and Saturdays, even though I'd worked at AT&T for 18 and a half years, I'm single, no children, TCU is down the street. But my managers changed all the time, and I had to sit down and talk to them, three times throughout the program, to ask them for personal favors, because HR would not approve my time. It was tough for me. Everybody's situation's different. People with families, their time is different, but the one thing I will tell you is, read your material, set time aside, unfortunately it takes a couple of hours every single night. If you're a fast reader, that's great, but I'm just telling you, be prepared and don't take anything new on [outside of work]; be committed to the program. That's the most important thing.

I was a new manager at work, I was a single mom, I didn't have someone at home, cooking dinner, doing laundry, helping with homework. All that on top of studying at a minimum 15 to 20 hours a week. I learned really quickly that you do have to read the material. You need to be able to diagram the material; you need to be able to explain it to your class. I think the distinction for me, is no business in my undergrad. I had a lot more to learn.

I just found ways to set aside time. I woke up every morning at 5:00 AM, it gave me two hours before my kiddo woke up. I took a case study every day to lunch. I brought my lunch so I could use that hour of time to really get involved with that case study, and then make notes, so that at the end of the week, when it was time for class, I could just go back over all the notes to prepare me for that class day.

Everyone in my teams were fantastically supportive, and they didn't even attempt to make team meetings, or projects, due around the time that I had my daughter. And I learned so much from my teammates. The areas that I thought I was weak in, like finance and accounting, I had amazing team members that had undergrads in finance and accounting, and they really helped me. Also, really relying on the faculty, any professor that I called and said, "Hey, can I meet with you on this?" I always walked away a hundred percent feeling better about the subject matter.

I think that if you stay committed, and you carve out all those little nooks and crannies in your schedule, then you're able to get it done.

How did the learning environment help you develop connections?

The format of the program allows you to get to know all of your classmates very well. You have all of this teamwork that you need to do with different participants, and so by the end of the program, you really get to know all of your classmates, and then if you have any interest in a particular field, you know that a classmate is a probably a resource for you. I know of many of my classmates who actually expanded their business, because of the connections they made through the program and some others actually got new jobs.

I felt like the day I walked in, our close class was very, very close. I had 27 new best friends. We all worked really well together, but the program facilitates networking events throughout the program and after and you have to take advantage of that. Our class always went to Buffalo Brothers after class – and we learned that from the class before us – and we really grew together in those very informal casual settings, over beer and pizza, to debrief what we learned for the week, what we had coming up. We celebrate with one another, we've grieved with one another. Companies have been built, people have been hired within our class and we still talk to each other every day. But the other thing is we all know about 500 people, so with the 27 people in my class, you're not just networking with them, you're networking with their network, and that's what really blows it up.

Why should I make that investment?

There’s immediate return on investment, because the things you learn throughout the program every other week are things that you can actually experience within your day to day work. Just getting to understand things better and have a better perspective. And then in some other cases, this program prepares you for higher responsibility. In my particular case, it was so direct. I graduated in December of 2012. By February of 2013, so just two months after, I got an offer to become the general manager for Alcon in Australia. By that spring I was already living with my family in Sydney and leading the business for Alcon in that place, over 300 million revenue, more than 250 people. I know that not everything was related to the program itself, but I believe it was a core aspect of the decision that the company took to send me there.

There's several things I've been able to do because of the program, that I wouldn't have ever been able to do before. I took everything I learned about learning agility, and I created Corporal Sergeant Leadership, lieutenant leadership training for the police department that we didn't have before, and it's really kind of changed the face of the department. I've been able to build a homeless outreach team. I've moved from being a low-level supervisor to working in the chief's office and an advisor on project management.

It also gave me the ability to pivot, and in my strategy project I wrote about a business that I want to create. I never went into this program thinking I would have the ability to do that. Now it's very real and tangible to me. There's so much more than just the academic work that you get out of this program. It really does, at the core, change who you are.

I feel I'm a completely different person today. Just how we approach problem solving, resolving conflict. Where other people see just conflict, I see an opportunity to create a better outcome, whether it's domestic violence, whether it's police work, whether it's relationship building in the community. It's just a long-term overarching thing that has changed me dramatically. And it's not business related, but it's still client driven. At the end of the day, we're preventing homicides, in the domestic violence work that we do, and in connection with my classmates, in connection with the police department, that return on investment is slightly different, because we're creating an outcome in our community.

Any words of advice you would give to prospective students?

I can remember having conversations with Kevin, and I gave him every excuse, I think five different excuses as to why I couldn't do the program, and he would call me and say, "What about this?" Then, "What about this?" One of my big excuses was, I'm a single mom. I can't, that's selfish. I can't enter this program as a single mom. He set me up with two other single moms in the class before me that said, “you can and will do this.” He helped me overcome every hurdle, and I think for women, we're so used to being there for husbands or children running a household, we oftentimes don't put ourselves first, and Kevin really gave me the permission to put myself first and it was the best thing I ever did.

If you're considering the program, don't delay your decision. It's easy to always say, "Okay, maybe I'll think about it next year." There's no perfect time for it. If you feel that you have the support that you need for the program, and you have the motivation to do it, just go get it done and you'll soon learn that it was really one of the best things you've done.

The panel shared much more insight that we didn’t list here. Join us for the next preview webinar and don’t miss a word.